lately off the painting desk is some Celt archers for Dave's army middle imperial roman army. The figs came out quite nicely I think, one day I will paint my awaiting horde of 400 odd Celt figures.


More 30YW off the painting desk last weekend, some more Warlord plastic pike and shot, these guys also have deliberately been supplied with no recognizable standard.. The plastics really paint up nicely and look quite good. I have another two warlord pike and shot blocks to finish off to give myself a four tercio strong 30YW army for the club games. 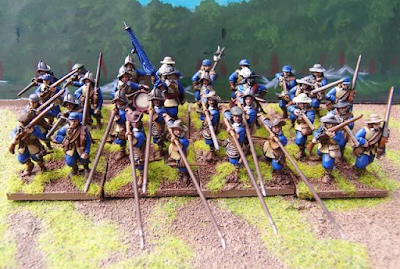 They have already fought their first battle where they routed a Astley's Regt (a foundry metal unit!) see here.

On monday Greg and I played a quick game of warhammer ECW at my place on the dining table as the outdoors is not so warm this time of year!

After setup we diced for each unit to see if it arrived on the battlefield, Greg's lobsters failed to arrive and were left off the table for two turns.


I won the toss and elected to take the first turn, as we were playing on a small table I advanced forward my pike blocks to have a little room (in case of fleeing troops!) and dismounted my dragoons in the village so they could control the village, I fired my cannon and caused the first casualty! Greg then moved a few of his units sending his dragoons and clubmen into the village, moving his Irish and Scots leaving one unit to fire as we were within range causing casualties to my units.

turn two, I elected to leave all my troops in place so they could fire full volleys, causing massive casualties on the Blue Regt almost causing a morale roll! My cannon caused some more casualties on the Irish Regt, my dragoons fired at close range (2 inches) at the opposing Dragoons, 1 hit from 9.......pitable. Greg then dismounted his dragoons, moved his clubmen into the buildings, moved his Irish and Scots, reloaded his Blue Regt shots

Turn Three, I remounted my dragoons and moved them back out of close range of Greg's dragoons, moved my General with is bodyguard and moved my Green Regt and the Kings Regt, and reloaded Astley's Regt, I fired my cannon and caused a few more casualties on the Irish. Greg moved his lobsters on my left Flank and moved his Irish, Scots and Red Regt closer to the action he also Elected to charge his Blue Regt against Astley's who stood and received the charge and were promptly cut up in the ensuing hand to hand (yes I rolled like a girl. Greg also had a crack with his cannon at my General and bodyguard who were standing in the open in column, he promptly rolled a misfire!!! My finely painted Foundry Astley's fled from the plastics off the table taking the dragoons with them, morale checks all round, all the rest stood!

turn Five I charged my cavalry against Greg's artillery, Greg's Blue Regt last turn had followed up Astley's Regt within close range of Gerard's Regt who blasted them at close range, and the Kings regt also hit them from the flank with one sleeve of shot, the Blue Regt panicked and fled causing some of Greg's units to flee, The Scots ran off the table (with out being effective), the Red Regt stood and the Irish ran like girls!

Greg however returned the favour charging his cavalry against my Gun, who were all cut down, he also mounted his dragoons and charged his clubmen against the Kings Regt, the clubmen failed to hit and fled back through the village.

Turn Six High Tide I thought for me I charged Greg's fleeing Irish, who continued to flee, I reformed my Kings Regt and marched them off towards the action on the other side of table, in my haste I failed to move my Green Regt to face Greg's lobsters.
My c General finally finished off the artillery. Greg then rolled like a legend and reformed his Irish, he charged my Green Regt with the lobsters who failed their panic test and fled taking Gerard's Regt with them, my whole center collapsed leaving only my General and the Kings Regt on the table.


turn Seven I moved the Kings Regt again towards the enemy and retired the King and his bodyguard. Greg charged the Kings Regt with both the dragoons and the lobsters, the kings men stood and received the charge but failed to do any damage and promptly threw up their hands in surrender, The King Fled from the table.........again! 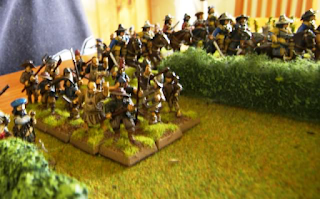 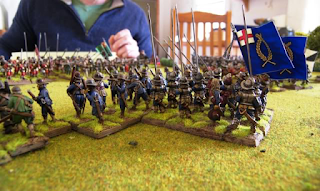 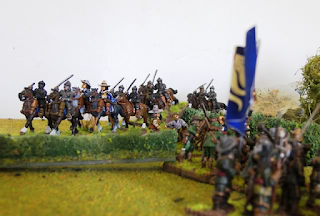 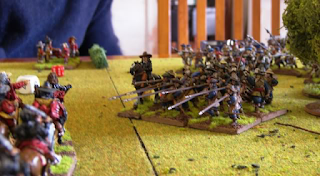 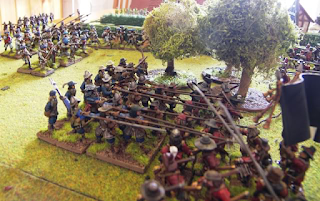 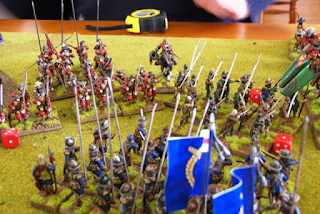 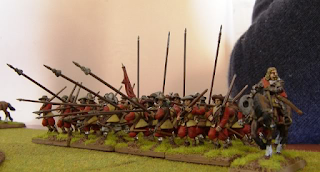 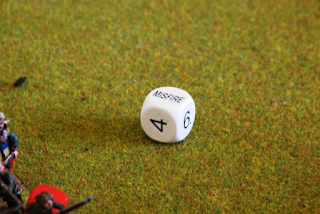 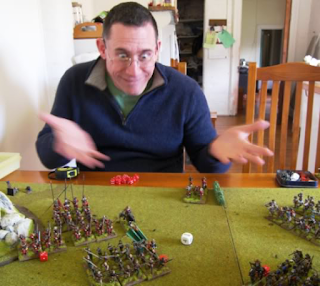 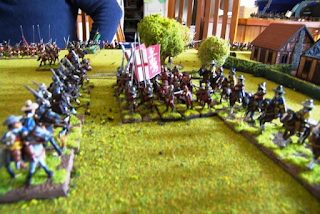 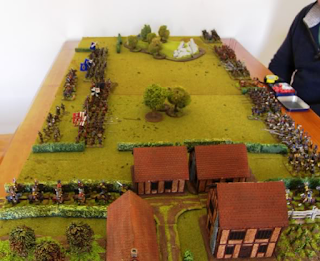 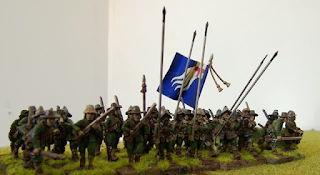 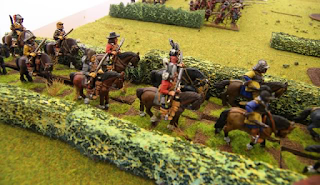 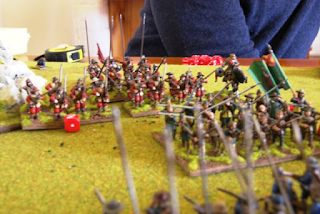 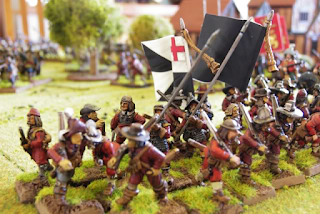 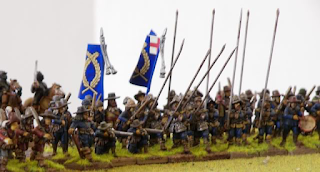 A great day out, I thought I had the game in turn six but not to be, great to have my ECW out for a game though

Just off the painting desk some Warlord plastic pike and shot, these guys have deliberately left with no recognizable standard as I want to use them for our 30 Years war games also. The plastics paint up nicely and look quite good. I may at some stage replace the plastic pikes with metal ones as I have already broke a few off through reckless handling :). I have another four warlord pike and shot blocks to finish off to give myself a four tercio strong 30YW army for the club games. 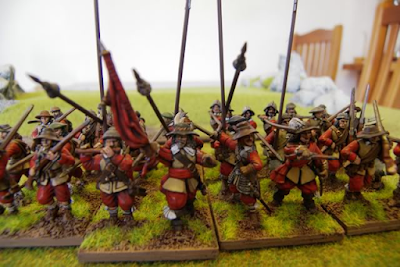 I have just finished this army off this week, it is made up of three or four manufactures (as i like to mix up ancient and dark age armies a lot. As I all ready have three dark age armies and I am rapidly running out of storage, I am selling this army (I have sold the army since posting it this afternoon).

The army is designed to be quite flexible, late Saxon or Irish with three core units, two cavalry units one mercenary and one of mounted infantry, and a few skirmishers to finish it off, around 1800 points in WAB terms.

The standards are on printed paper with hand painted highlights particularly happy with the cavalry standard on the mercenary sarjents( they are all from Rays site, cheers mate!). The shields are LBMS and hand painted. 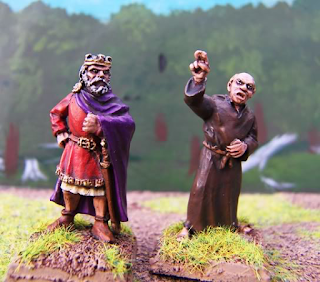 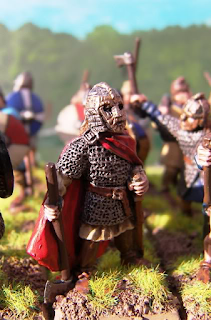 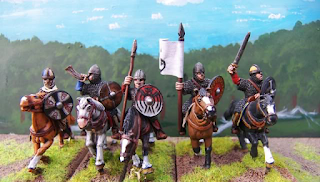 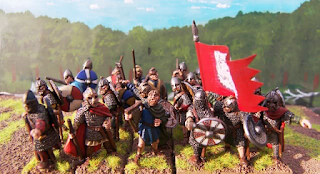 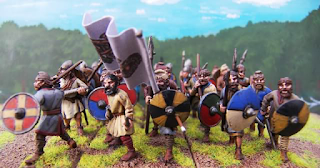 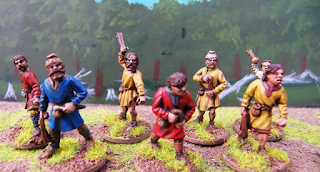 The lastest units I have painted of Dave's army, a unit of cavalry which can represent any of the allied cavalry unit, the unit is a mix of manufactures. The last unit is some German type allied archers which should be quite versatile, able to be used from 300 to about 800AD. 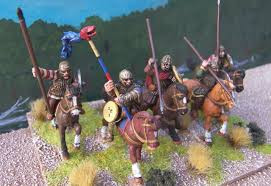 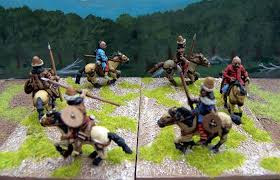 Some more of the ECW army I bought back at the carboot sale. This unit are all Eureka miniatures. They represent a Irish Pike and shot unit that arrived to help Montrose's campaign in Scotland. A quick paint touch up and re-basing was all that was required 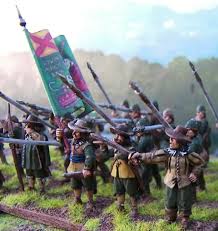