The next unit off the table is Auxilium Palatina Constantiani, another unit of BTD figures, the most challenging shields so far, in the end I got sick of trying to get them perfect. 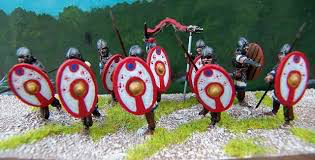 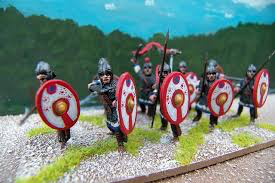 One of the more famous Auxilium Palatina units, the Salii were raised from Frankish tribes, from the region south of the Meuse river and the Scheldt river. Again Black Tree design figures with hand painted shields. 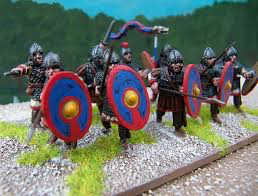 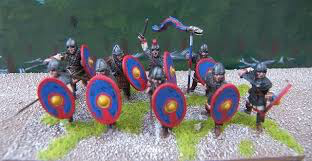 I just noticed I have a few repairs to be done to skin!!!! Also need to add tufts when i pick them up in a week or so..

Finished the first of the Auxilium units, this unit may have its shields swapped to become a different Aux unit after doing a little study I found out that Transtigritani Aux and the legio Transtigritani (pseudocomitatensis) were raised from Persian exiles, so the figures should be a little darker skinned...........All of the figures are from Musketeer and BTD, shields are hand painted. 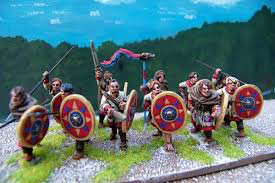 Another cavalry unit off the desk, these guys have been sitting around half finished for some time, so I decided to hand paint some shields for them, add the draco, spears, finish the skin and clothing highlights, and do the eyes, I am very happy with them. The Black Tree design late Romans are quite good, I think i will get another two units of these to act as medium cavalry and do some more  heavy's with A and A . 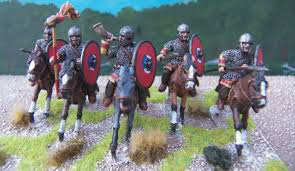 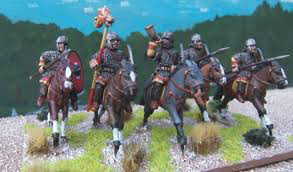 In the campaign I was awarded 20 (impetus) points of Ostrogothic Pirates to help me raid the Roman eastern territory's on the black sea, so of course I needed some unit to represent them! So I hunted around my spare fig box and came up a little short with a few BTD archers that would be suitable. Alas I had no warband types, so I trundled off to the cardinals house of wonders and sure enough he had some spare dark age figures I could use. The old glory miniatures are from the viking pack (I think) and were castoffs........so I ended up with the infamous bard figure, so what better figure for a leader!!!!! 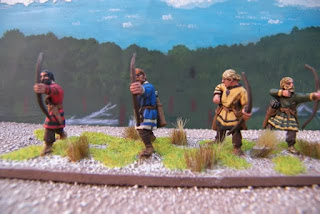 Next unit off the desk this week Lanciarii Iuniores, I used a mix of armoured and unarmoured Musketeer and Crusader miniatures in this unit. All hand painted shuiled with a GB draco, which i intend swapping with a Vexillum soon, I have armed them with a Lancea and two 'subarmales'-light lancea. Speidel suggests that they may of had up too five lanceae.
A few interesting arguments continue about the actual role of the lanciarii. Brian Campbell believes that lanciarii were associated with the 'sacer comitatus' ("sacred retinue") and was part of the small mobile field force accompanying the emperors, he also argues that the lanciarius ranked above a legionary, but below a guardsmen.

Phil barker suspects that the are light armed troops that performed the skirmishing of a Legio and later in the period were formed into their own troop type.

Speidel argues that thier were two types of legionary in a legion and uses Arrian description of two types of longchopohoroi - fully half of the regular legionaries, who throw their weapons overhead of the other half. Arrian's legions in Cappadocia (XII Fulminata and XV Apollinaris) deployed in 10 rank deep formation, ranks five to eight were armed with lancea, nice was archers and ten was horse archers to counter the Alan Cataphracts.


Duncan Head suggests imperial Roman lanciarii had their origins in the republican Antesignani.Duncan also notes that a similar split among the legionaries can be found in a papyrus detailing donative records of Legio II Traiana in Egypt ca. 300 AD, from which it appears something like 45% of the men mentioned are lanciarii. 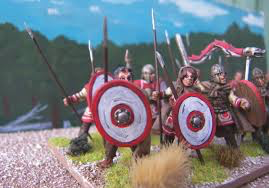 Another addition to the Late Roman army some German Heavy cavalry a real mix of ranges, gripping beast, foundry, old glory on gripping beast horses (I think?), the shields are a mix of hand painted and LBM dark age transfers. The Draco is from the WF plastic Saxons I think..... I will be using these in my Frank, Goth, Alamannii and Roman armies 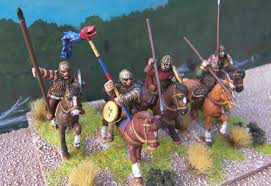 Some Alan Or Goth horse archers off the table this week who will no doubt get use in my Roman and Sassanid armies. I am very pleased with the result of their stripey pajamas, The A  and A range captures the movement of the horses well, again I have based them in a circulus cantabricus.

Only five more bases to go of horse archers, which I ordered from A and A last week and my Sassanid army will be nearly ready for action! 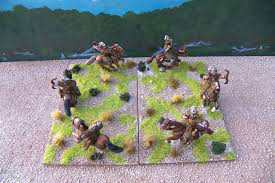 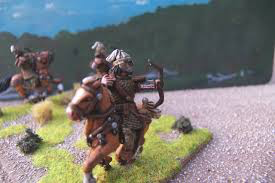 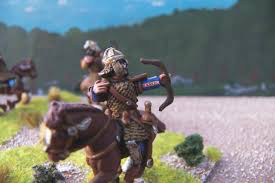 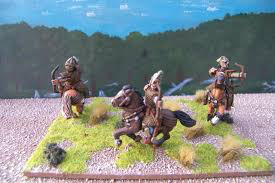 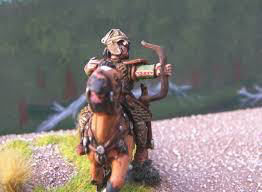 Labels: A and A Miniatures, Alani, Fall of the West, Goths, IMPETUS, Late Roman, Sassanids

A few more late Romans off the desk a mix of A and A, black tree and crusader miniatures. 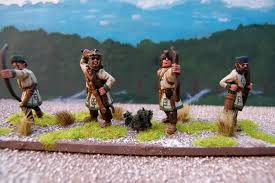 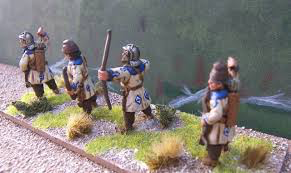 One of several units off the table this week my general for my late Roman army with his private bucellarii. The shields are a mix of hand painted and LBM transfers.

The General is from Black Tree Design, his horse is A & A, the remaining horses are gripping Beast, the std bearer is foundry and the remaining figures are Gripping beast, the draco is BTD but with a wire pole. 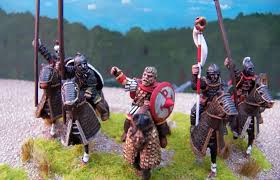