This year I also want to revisit my 1939 Polish Army and complete all of the unpainted vehicles (30 odd), and paint two more battalions figures I already have sitting in storage, some dating back in 2012. I want to purchase some to fill out the ranks by adding another battalion with the new 20mm XAN infantry figures (match his original range sculpted by him for Fantassin Miniatures which make up my current battalions). I also want to get the resin Scibor vehicle crews and command figures as they look fabulous.

For the AA, artillery and AT guns I will add a mix of pieces. First to Fight plastic gun crews mostly to crew some plastic, resin and metal gun pieces and Early War Models metal crews for the specialists. Lots of horse drawn equipment is required so more HAT and EWM horse drawn wagons. For trucks FTF Fiat and Praga trucks and IBG kits for fiat staff and radio cars.

For the next article I will cover my organisation of my cavalry. I need to purchase FTF mounted Uhlan cavalry for command figs and horseholder. I already have the HAT plastic French for the mounted component. I would also like to add First to Fight dismounted cavalry portion and some SHQ also. I need to purchase the specific FAA miniatures for the 10th Motorised Cavalry Brigade motorcyclists. Finally scratch build and purchase some more vehicles mostly soft skins mostly motorcycles but I may print some also. I have set a target of completion for next year for the cavalry.

My fighter and fighter bomber air component is complete except for a bomber, which I will wait for one to come up on ebay or such.

Rapid Fire does not have a official list for Poles yet, but there are some unofficial lists around on which I have loosely based mine on. Rapid Fire does have the charts for guns, vehicles and aircraft though which is helpful when playing.

The first task is to build a Infantry division of a single regiment, than add the support elements for extra goodies for game play, as I like to see supply and medical especially on the tabletop. The Polish Infantry Regiments were very large and basically followed the same structure, 3 battalions plus support elements. I am not planning on painting any reserve regiments or the static units, although I am tempted in the future to build Polish field defence bunkers. 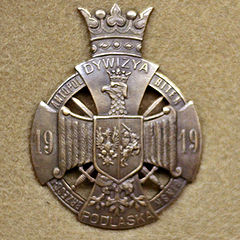 Next Article will cover my cavalry and armour, followed by painting guides and then aircraft. 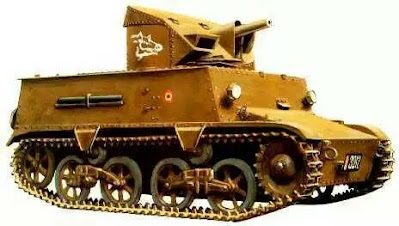 This year I want to complete some more of my 1940 armies. I have decided to add some more units to my Belgian army, cyclist infantry, artillery elements, armour, aircraft and complete my Ardennes Chasseurs regiment. My main focus will be infantry and cyclists. I also need to paint my armour T13 and T 15, plus some artillery pieces, tractors and trucks. All units will be built for Rapid Fire.

Division de Chasseurs Ardennais
I have completed my first battalion, I do however require to paint my 2 x T15, 1 x vickers carden llyod 47mm complete my tow for the towed 47mm, and some support elements, trucks, tractors, medical and engineer coy.
Regiment Karabiniers-Wielrijders

I have purchased the HAT cyclists to paint as my cyclist karabiniers. The cars are from a diecast company,  truck are plastic and resin kits and telephone trailer is SHQ, resin medical truck from Minarion

ACG1
I want to build the ACG1 although in RF this is only two models. Most of my force is built around the southern component of the front. A short history for you to whet the appetite...

The 10 Belgian ACG1 (AMC 35, 9 with the altered belgian turret) were formed into two platoons for the invasion and was attached to the Corps de Cavalerie T13 2nd Division. The unit initially were based in Brussels but in the first week were moved to defend the bridges between Willebroek and Vilvoorde.  The Squadron was commanded by Kapitein R.Hullebroeck , and divided into two platoons of 4 tanks with two in reserve.

The Belgian Air Component was small but had a good training system so a number of pilots were well qualified but most the the air component was mostly destroyed on the ground in the opening day of the war.

On the early morning of May 10, the alarm was sounded, and the pilots at Schaffen Air Base went to their planes, thinking it was an exercise. A few minutes later, 50 unidentified aircraft flew over the airfield. Despite his orders, Captaine Max Guisgand, the commander of 1/1/2 Gladiators flew his planes into the air at 0420 hrs while the Hurricanes started their engines. 12 minutes later, three Heinkel 111s were spotted, not troubled by AA fire. The planes in the air were not there when the 111s came, and the 111s strafed the airfield several times. The planes tried to take off through the explosions and fires. A bullet punctured the main wheel of Lt. Wilmonts Gladiator and he rammed a Hurricane. Minutes later 110s and Dornier Do 17 strafed and bombed the airfield. Four Hurricanes were set on fire, and 6 others were damaged. The roof of the hangar fell in and the planes in it were destroyed. Sgt. Libert was burned badly when the fuel tank of his Hurricane exploded. Captaine Van den Hove d'Ertsenrijick and Caparol Jacobs managed to escape from Schaffen. They encountered some bombers but didn't manage to shoot down any, even though helped by Gladiator pilot Sgt. Van den Broecke. The third section of Gladiators from 1/1/2 almost collided with the three 111s and had to break away.

The second section (Cpt. Gerard (G-27), Sgt. Henri Winand (G-32) and Sgt. Henri Clinquart (G-34) spotted a formation of enemy bombers and broke it up. During the bombing, other gladiators left Schaffen for Beauvechain. Hurricane pilots Siroux, Lelarge and a lt.) flew three of them. Other reported engagements were when at 0900 10 109s ran in to two Gladiators over Tirlemont. Both were shot down and one pilot bailed out. At 1000 hrs, three Gladiators were shot down by 1/JG27 while trying to intercept escorted Ju87s.

A few missions were completed by the Belgians bombing three bridges on the Albert Canal on the of 11th May. The bombing was done by Fairey Battles of the 5/III/3Aé, the fighter escort was provided by 1/I/2Aé Gloster Gladiators.  On the 11th May out of fifteen Battles that attacked pontoons bridge across the Maastricht, Veldwezelt, Vroenhoven and Briegden, only five aircraft survived.

The 9th and 11th squadron flying R31s still had aircraft in the sky when the surrender was announced on the 28th.

As I love building aircraft I have gone overboard for my Belgians.....

Hawker Hurricane mk1 11 in service (only two survived the bombing of the airfield on the 10th of May, they were lost on the 11th) (completed)

next up another 1940 project

Last kits all sherman M4a1, will mix in my sherman allied units.

Happy with my progress, I would of liked to have done a few more but lost enthusiasm last week. Next job get the kits assigned and do some painting! 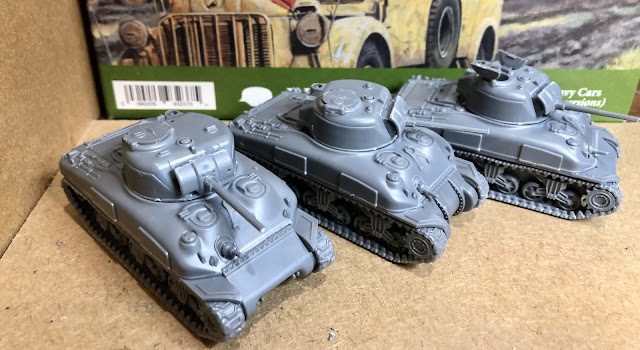 The final week of the challenge I finally had some time to sit down and complete a lot of kits, all PSC which are simple, some I will revisit to add finer details and stowage when I return home to France. Again focusing on allied kit, but three german Styers also slipped in. For the first time I have not built a aircraft in the build although did pick up a box then put it back......

An update for last week another 3 kits from PSC, simple builds for my French 2DB. quite a bit behind my target at the moment though! 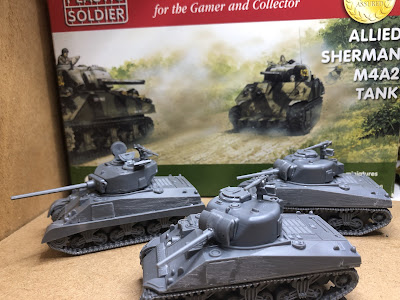 Ok off to a crackings start but that is easy with PSC kits, although sometimes not the most accurate 1/72 kits on the market with actual scale off sometimes (a lot) and parts that are not correct (shermans) they do make kits that are really simple to put together, I purchased a lot of them last year on sale and they have been sitting in my kit cupboard ever since. I have elected to try to concentrate on Allied kit in this build, first up some british kit , stuarts, bren gun carriers, some trucks and a battery of 25lb guns, plus limbers, tractors. Then some shermans for my Free French, then onto some other bits I think, I have a bunch of Panzer IV to assemble Fijimi......purchased a long time ago.
Week 1 total 6 kits
Bren carriers, an easy simple build 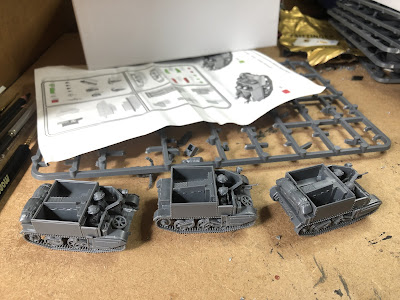 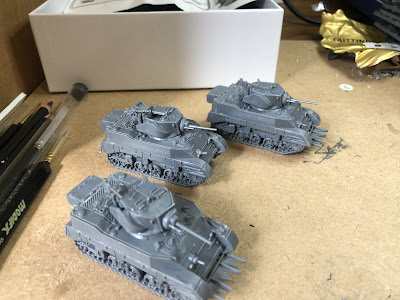