Sometimes I think wargamers are a bit like women when it comes to buying stuff for our hobby we go out with good intentions to just get one or two items and come home with an armful! It all happened on Monday when the Cardinal and I went for a drive too Canberra to spend my Father’s day money and pick up some Vallejo paint and peruse the bookshops of Fyshwick (Academic remainders and Crusader books). We went to Crusader first to pick up some Vallejo paint and have a look at some books, so I picked up a mix of browns and some washes. Next stop was Toyworld and as my painting MOJO has returned and the weather is warming up I decided to peruse the kit shelves and decided to pick up an Apache helicopter (Airfix) as I am starting another modern army in 20mm and I thought justified it that way, then we decided to get some lunch next, however we thought that we really should visit Monaro hobbies. At Monaro I was pleasantly surprised at the amount of plastic kit they had of the shelves and decided to pick up a Trumpeter M1 Abrams, however on the way out they had a sale on ICM cold war Russian kits for $5 each, so I picked up 3 BTR152’s and 5 trucks!
Now I normally get one of my mates to put my kits together because they annoy me and I have two left hands when it come to fiddly bits. However as they last few days have been wet I have sat down and put four of the nine kits together already.
The Apache went together very nicely and I made the rotors removable for transport. 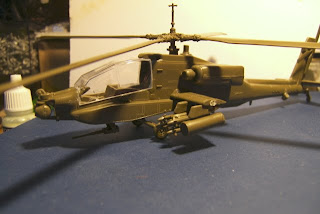 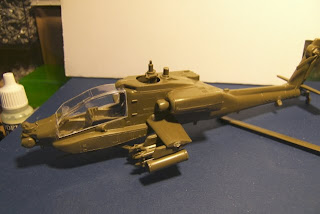 The ICM 152 kits are excellent and I put them together easily also, the ICM plastic is a little different
so setting times are a little longer, but I used a production line so I could do three models at the same time, a few little adjustments, so battle kit and damage then off to the spray booth for all of them (probably after I finish the trucks). 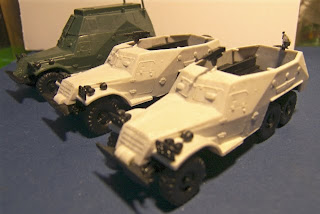 The BTR152s and trucks will see service with my Soviets for Afghanistan and Cold War and may even make it into my African Warlord army, so I think either a generic green or the tan/khaki camouflage.

On the painting desk I have some Volunteers de Clermont (see my 18th century blog 'Fine and Dandy") and some 18th century civilians, next up will be some WSS French and then some more Imperial Romans, and some individual British general characters for the “William Atkinson memorial build” on the Guild forum.