Anjou-Maine Infantry IIII
Another unit of Anjou Maine dark age infantry circa 800 when the comte de Anjou was created up to the Northmen invasions the fighting with the Bretons  for Maine in the 9th and 10 centuries.

Next coming up are some Viking raiders, partnering with our Vikings in Maine battlefield and history tour, plus added with our historically themed local battlefield wargame  in our “salon de Guerre” at L’Hôtel de Hercé.

Figures are Plastic gripping beast with LBM transfers, need to pick up another three boxes to complete the army I think

Another unit off the table the final naked unit, now to complete some more plaid! 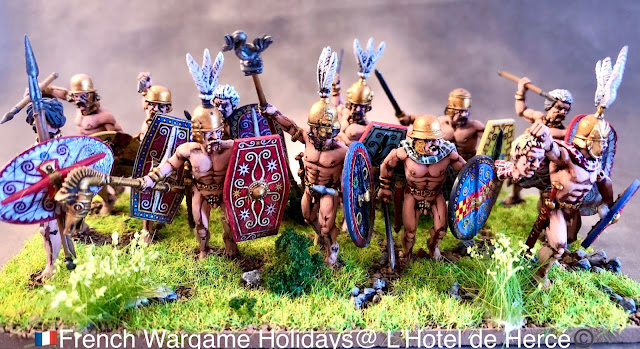 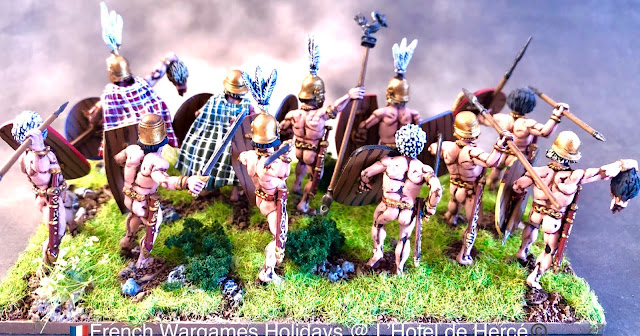 I received these figures already painted as a gift for Christmas and decided to base them as a Saxon command or a generic dark age command, figures are Gripping Beast, mix of hand painted shields and transfers, plus the flag is LBM.

Buried in research at the moment for 100YW armorials for lords and knights of Anjou Maine. 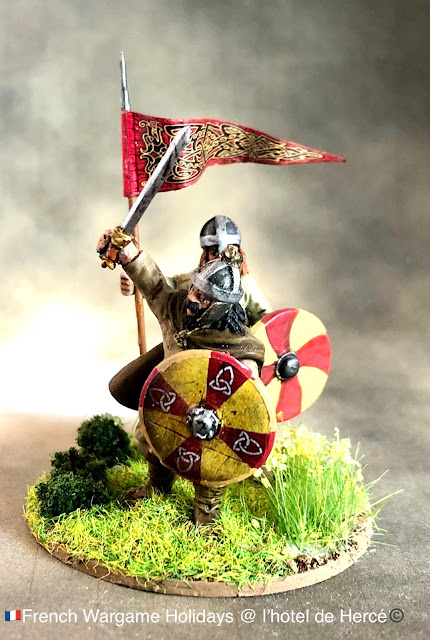 Another completed 20mm building off the desk last week, this one is specifically for my ww2 battle of Mayenne bridges game for our Wargames Holidays "Walk the battlefield in the morning, Wargame in the afternoon" tour and wargame. Thirty odd more buildings to complete plus the tiles including a basilica and the three bridges, hopefully complete over the next three months.

This building was a birthday gift two year’s ago and is a 3D filament print. After a lot of clean up I think it looks pretty good. I copied a paint job of a building near the old railway line here in Mayenne, the red and yellow brick is regularly used here but mostly on rendered buildings, a late 19th century fashion. The building interior also had printed pieces which look pretty good too. 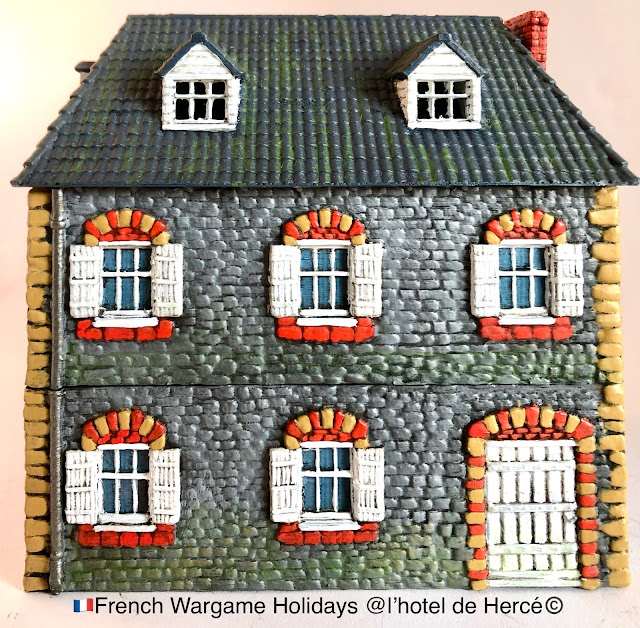 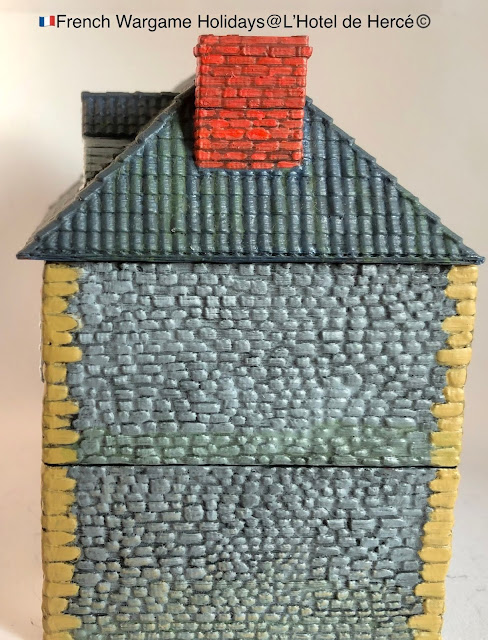 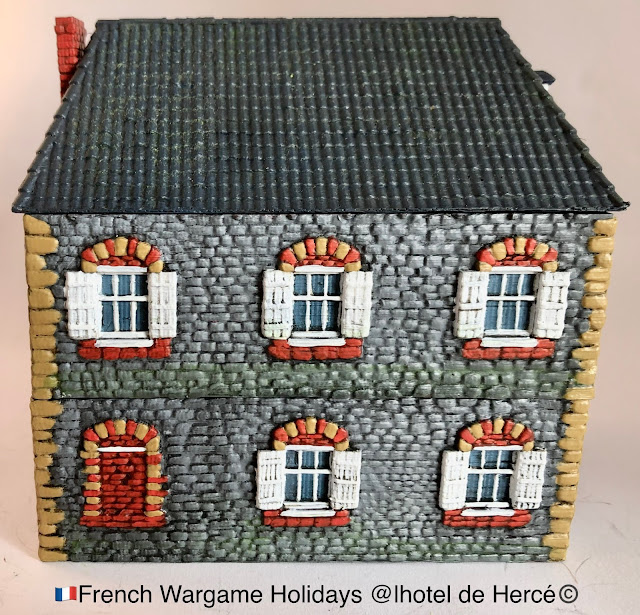 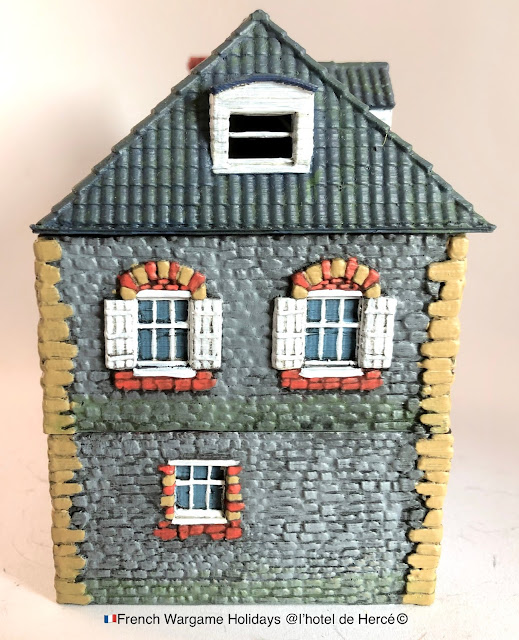 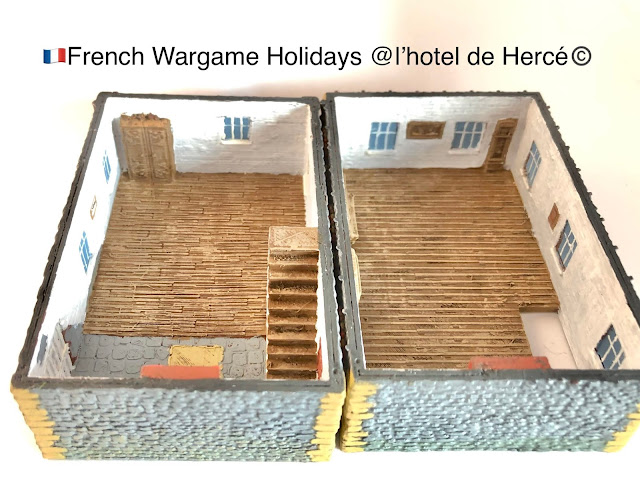 Another unit completed for my dark age Franks, ready to fight the troublesome Bretons. Figures are gripping beast armoured dark age plastics with Victrix Roman and Celt plumes, flags and transfers a mix of LBM and warflag, getting low on transfers so need to make a order this week, hopefully they will make it through the border!

The yellow flower I place on all of my French bases is a common weed here locally and where Geoffrey V of Anjou got the Plantagenet nickname from, as he fathered a lot of bastard children so many they were like a weeds. The original name for the plant was planta genista in Latin before being changed in the 1900s to Cytisus scoparius or common broom. The plant was also used as a heraldic badge by five other Plantagenet kings of England, Anjou, Maine, Normandy and Aquitaine as the royal emblem.The "broomscod", or seed-pod, was also the personal emblem of Charles VI of France.

Much on the desk at the moment with six units awaiting basing, just waiting on yellow tufts to arrive from Germany. 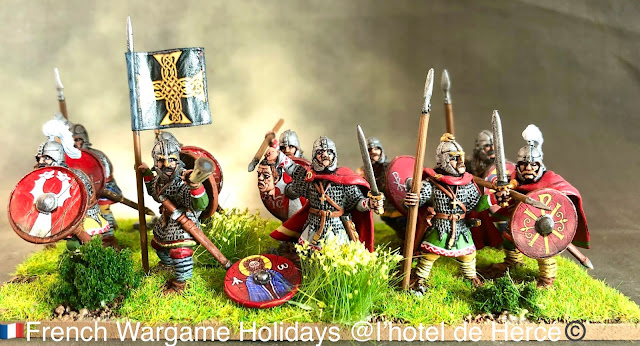 I thought I would add some images of Gaulois Coins today from the Gallo-Roman Museum at Jublains, Mayenne.

The coins are difficult to photograph as they are set into a Perspex sheet so you can view both sides and lighting and back drop is not great. Next visit I will take some white card and update the photos. The collection has a few gold coins and a large amount of silver and copper pieces. Several coin hordes have been found in Mayenne district, most museums around the region have pieces of the Aulerci Diablintes coinage. Some moulds have also been found by archeologists also. 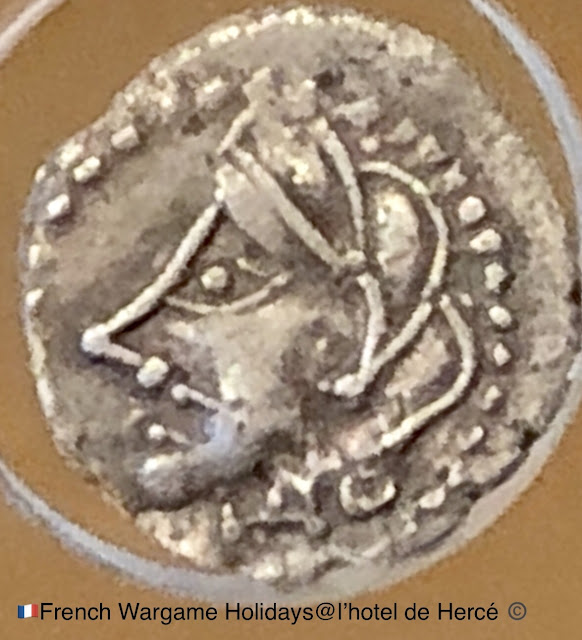 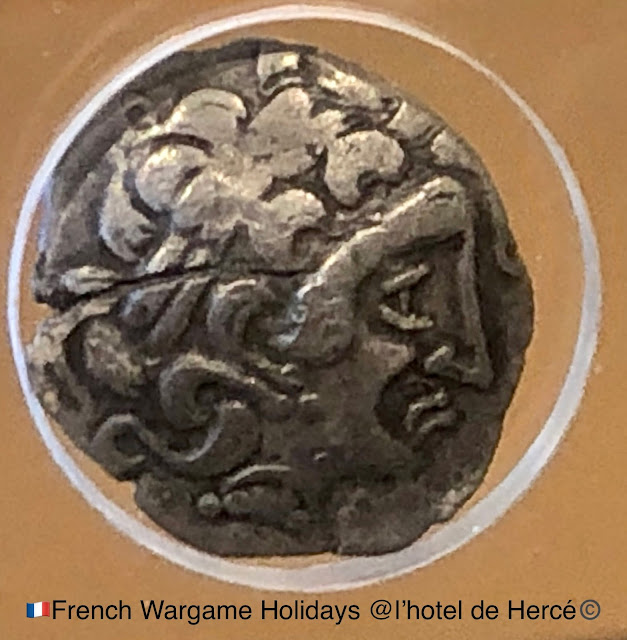 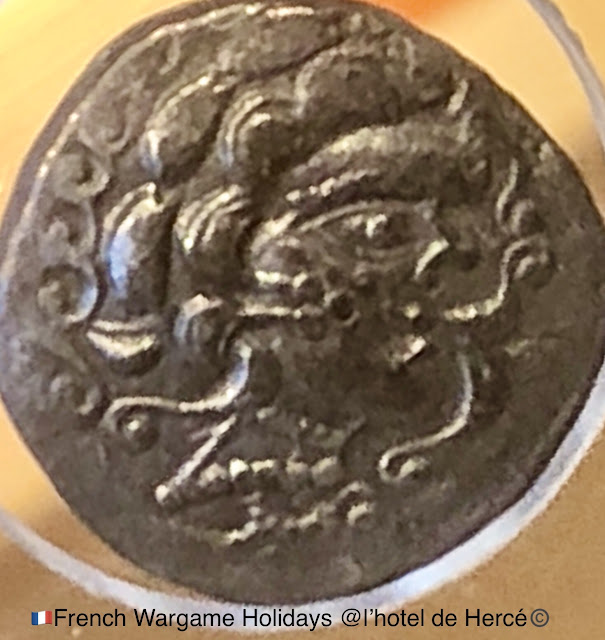 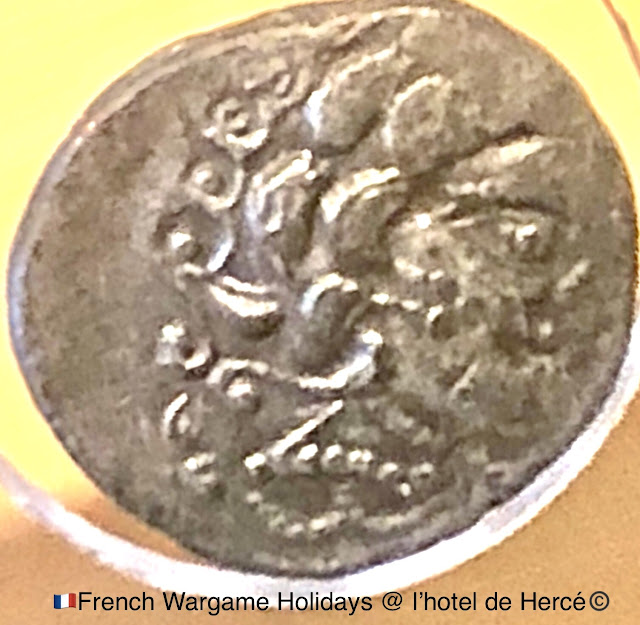 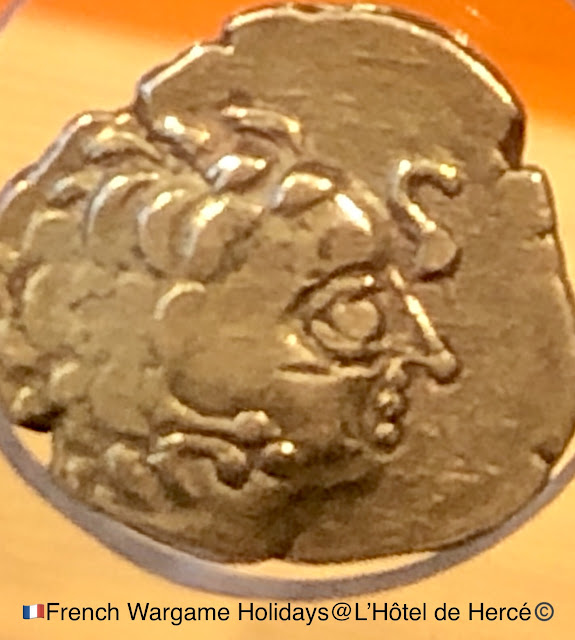 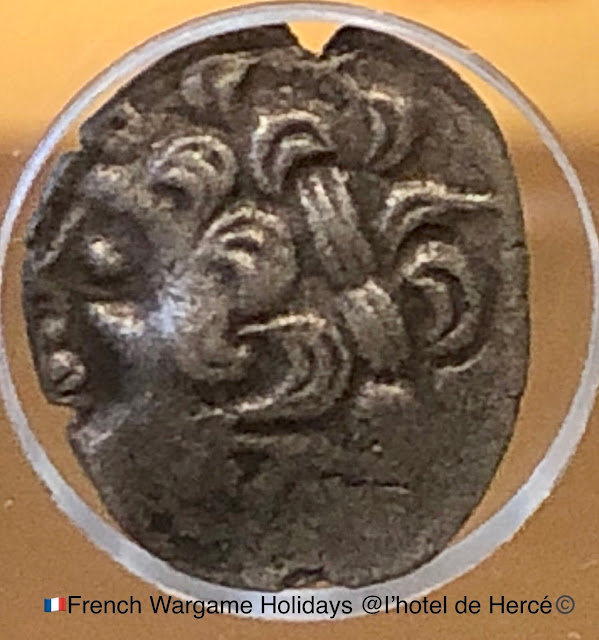 Another unit completed, Breton Javelin Skirmishers based for impetus, actually they would suit the Franks of Anjou Maine also,  figures are gripping beast plastic with a few Victrix heads.

Another unit of medieval Anjou Maine Infantry to defend against the Norman and Breton invasions in the 11th century. William the Conqueror and Conan of Brittany bring the two main opponents in the period.

Figures are from the plastic gripping beast dark Age set with some Victrix heads, and additional metal or plastic hand painted shields. 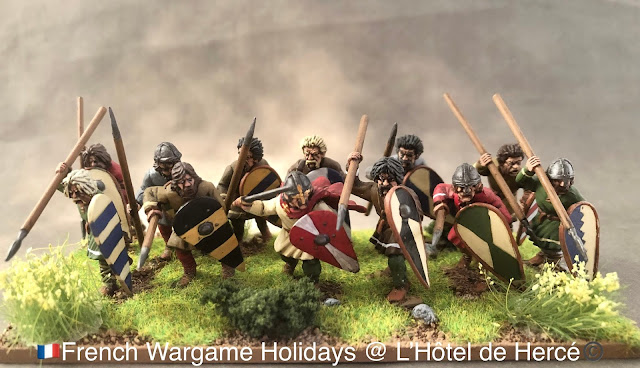 Last week while resting my eyes from plaid I prepared a bunch of 20mm round bases for markers (actually completely exhausted my stock of them), just builders sand glued onto the base, then painted and drybrushed as I do for Western European soil, rocks painted, then flocked. I felt I had enough Gallic and Roman, so I dug through my spares box of shields and decided to do some dark age disorder markers also. All freehand painted, quite happy with them, got a little carried away and completed another 10 so a Purchased of round bases required, plus now I will also do some Plantagenet period and 100 years war pavises as well. 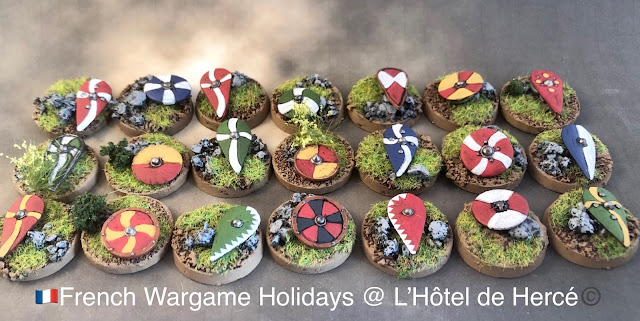 Completed a pair of light guns for my 7YW French they have been sitting around waiting eyes and skin highlights for two weeks. This will be the last 7YW I will complete until next year,  as we have not developed our battlefield tour and Wargame for our local 7YW battle.

I have decided to start clearing the desk off of all of the half finished bits also, ready for the new focus starting at the end of the week. The completion of my 100YW project, 100 + figs to paint over the next month or so. 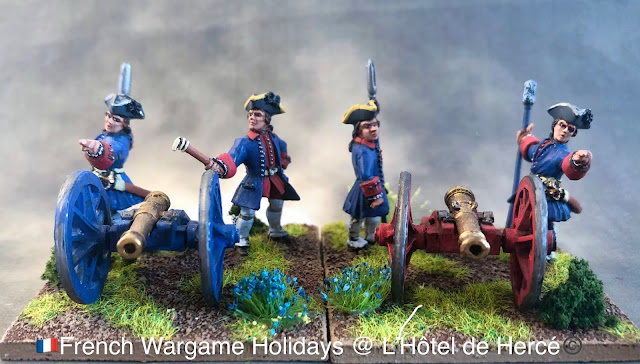 Completed another unit for my Aulerci Diablintes tribe, we visit the Gallic Oppidum and new capital at Jublains.
Part of our “walk the battlefield in the morning, Wargame in the afternoon” tour and Wargame holiday packages. 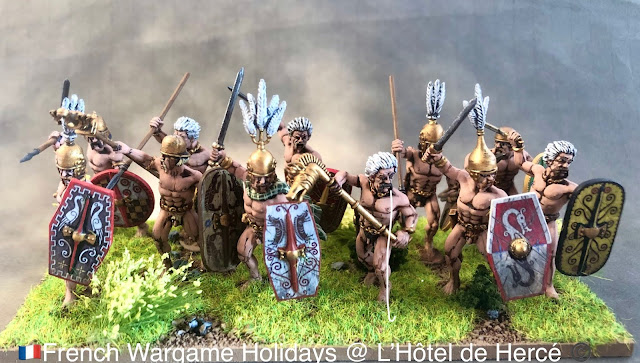 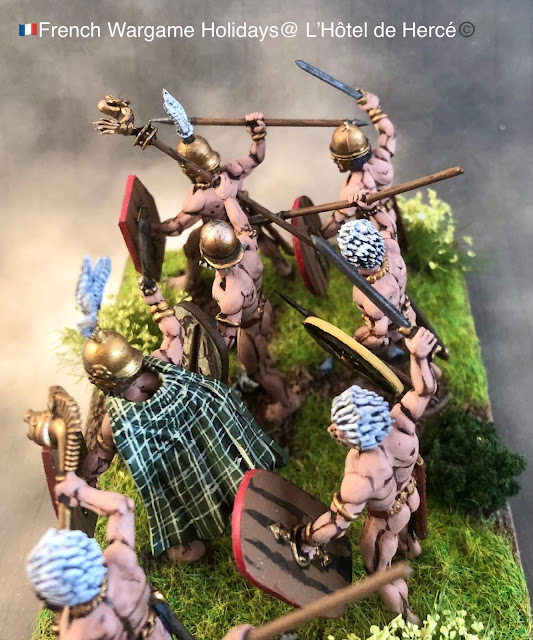 At French Wargame Holidays We offer a “Walk the battlefield in the morning, and Wargame in the afternoon”©️ tour and Wargame of the siege of Saint Suzanne, we tour the chateau with its eleventh century Donjon and the amazing Norman siege camp that still remains. 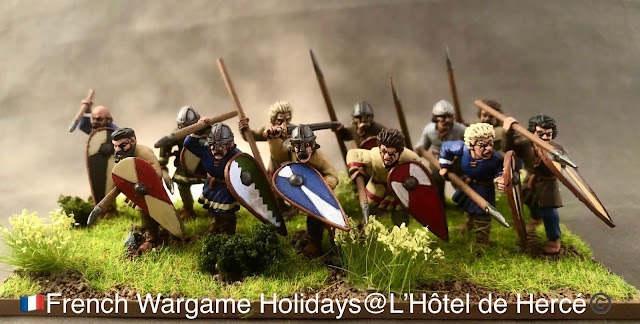