On the October long weekend I traveled up to MOAB (mother of all battles) gaming convention, this year I entered the Impetus 300 point 28mm tournament with my Sassanid army. The convention is Sydney's largest wargames convention. The crowds were down, I suspect that the Navy fleet review and the local NRL teams Grand final.

It was my first competition wargames event in 14 years, an I would like to extend my gratitude to Tarty for organising the event everybody who played in the event.

A pic of the guys, missing Mick though, who only played on Saturday. 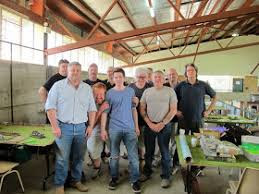 My Sassanid army was very small, 1 unit Zayadeen with general attached, 4 CM Savaran, 4 CL and 2 CL elite Savaran, a total of 18 VD, which is very small as I break at nine!
My first game was a tough one and had me asking why I had taken such a small and brittle, Robs Romans taught me a lesson about rear charges and zone of control. Rob eventually won the tournament. 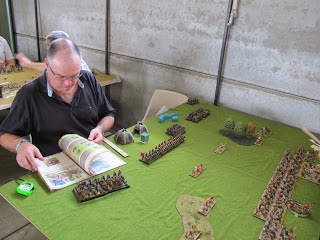 My second game was against a very shooty Indian army, Axels;'s army was beautifully painted, I drew out his elephants and chariots managed to kill the all buy the forth turn, causing Alex to reach break point, with zero losses to myself. I had a exceptional rolling of my dice with two units getting 6 hits from 7 dice two turns in a row.

On the second day I drew Rex and his Normans, this was the toughest game of the comp for me, Rex tried to pin me against the table edge but I broke through his cavalry line and shot up a lot of his cavalry. I really learnt a lot in this game about the strengths and weaknesses of my army, I did stuff up, charged my cav against his and used my lights against his infantry instead of concentrating on his 3VD cavalry units that were already badly shot up.

"how the hell am I supposed to catch these guys!!!" 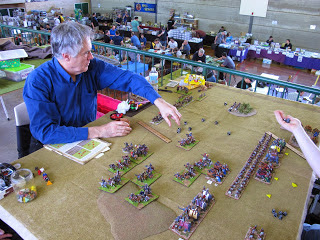 Rex's much loved baggage was a collection of lollies, which got progressively smaller over the weekend

I lost this game after failing a cohesion test after being charged in the rear, and my General died........

My last was against Dave's Persians, this army was beautifully painted! His chariot worried me, but was destroyed by one unit in the first turn. I had learnt to concentrate on high VD units by this game, so Dave had broken by turn 3. 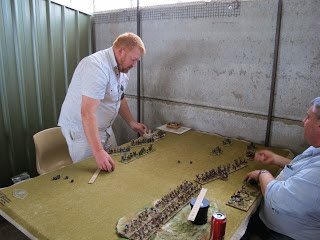 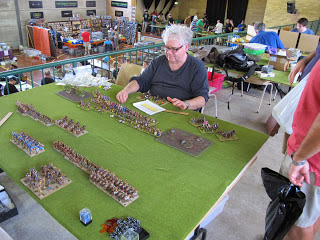 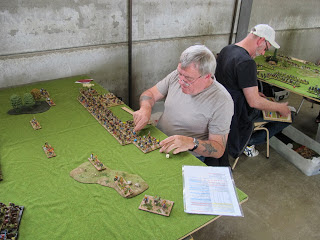 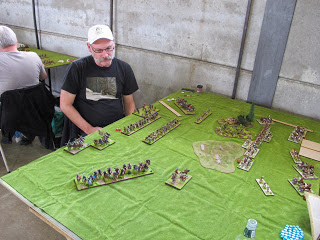 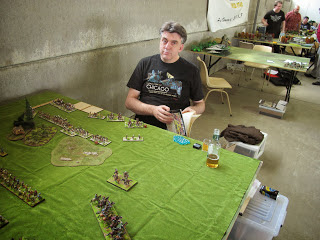 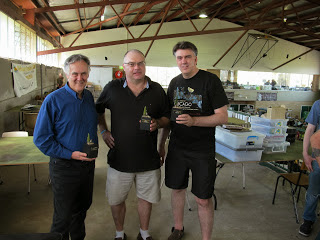