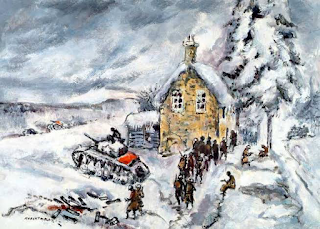 The annual Winter Analogue Painting Challenge is almost upon us again. This year I am trying to complete 1000 points as my painting target.

Points are awarded painting figures, artillery, vehicles, ships and terrain. As usual I will be concentrating on historical 20mm and 28mm miniatures with a few pieces thrown in for amusement.

20mm
Foot 4 points
Mounted and guns 8 points
Vehicles 15points
28mm
Foot figure 5 points
Mounted or artillery 10 points
Vehicle 20 points
Cunning Plans
My plan is to complete a number of projects, as I tend to squirrel and swap and change a bit to prevent boredom I have gone for a broad approach across several projects.
1. My plan this year is 1000 points in total, I plan to complete a few personal projects (British Airborne & Volkssturm) plus add armies for our wargames holiday business relating to local battles and sieges.
I will also try to do a few pieces for the side adventures, mostly at a whim and if it involves aircraft (which I love building), naval or space ships.
Hopefully get as much as I can completed in the 90 day period permitted.
Cheers
Matt

A goodly target. It might be time for me to have a dabble with a challenge to get my painting habit back!

The 8 points for artillery, is that. Just the gun and then each crew counts as a foot - or is that scoring for the full, completed gun base?

Just the gun or limber