Stategos Phillipe travelled up from Laval for a visit this week, for a game and a visit to see my progress on the renovation of the Salon de Guerre. We had decided on a historical match up of my Scipio Africanus based army vs his Hasdrabul. Phillipe has only played Advanced Impetus five times and had downloaded it in French now so had a better understanding of the terms and finer details of the game.

Philiipe organised his WAB based miniatures for Impetus, we elected to have a simple meeting engagement rolling for terrain we ended up with four woods, Phillipe placed his newly finished Elephant was having its first outing. I also had six units of my newly completed Gauls on the table. I placed two legions on the table plus extra two velites and two light cavalry and two FL Gauls to deal with the elephant and slow down his cavalry. Attaching my general to a unit of Triarii.

Turn 1
I won the command phase and elected to advance the whole centre and held back my cavalry on my left, just coming within javelin range everything released, but only one hit, first blood to me! Phillipe reposte, he advanced with his skirmisher line loosing  javelins at close range and caused a loss skirmishers a full base, plus casualties on another. His Numidian cavalry double moved flanking my lights and in a hail of short range javelin, the  "taxi de la mort" (cab rank of death) removed a whole base of my light cavalry. 1st round to Phillipe! 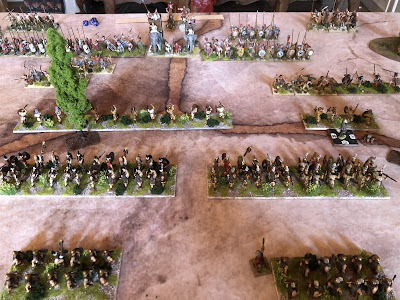 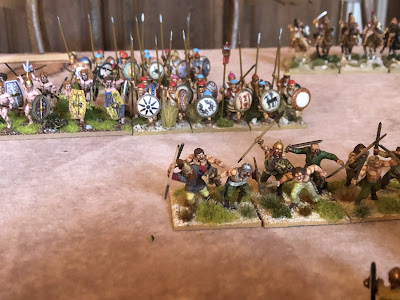 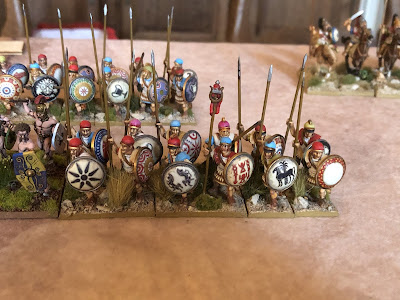 Turn 2 again I won the command phase and advanced again, this time my right flank skirmishers finally done some damage, two bases hitting the elephants, and one base taking out two skirmisher bases, I advanced my infantry but double moved my large unit of Gauls so they could threaten the left flank of the Carthaginian army amazingly they passed the discipline test. I also advanced my left flank light cavalry, to threaten his numidian cavalry and his heavies, I managed to get a strike on his heavy cavalry, but only a disorder. Phillipe reposte, he launched his infantry line forward, his Numidian cavalry decided to hurl javelins at point blank range the large Gallic horde, causing 2 casualties, he then charged his heavy cavalry into them, causing another loss, however my return caused one in reply also, we both passed morale so a stick. His skirmishers whittled away all of my left flank skirmishers and caused disorders on my heavy infantry, his Numidian cavalry on my left, caused casualties on my light cavalry leaving it with one remaining point. 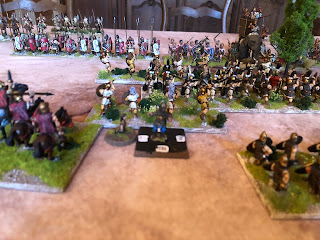 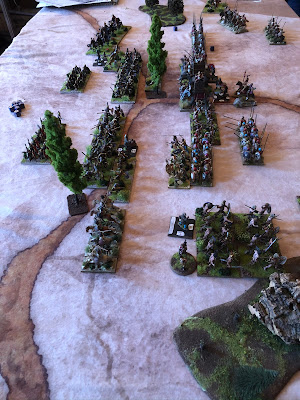 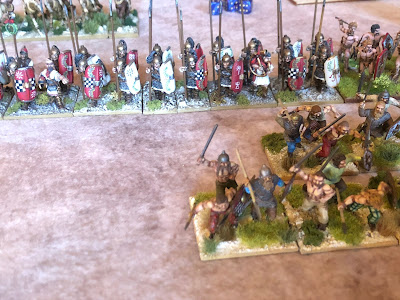 Turn 3 again I win the command phase, I elect to engage my whole line, and effectively use pilum and my manipular formation, breaking and destroying two units, and the follow up catch another one, my Gauls win their round of combat against the cavalry who run, catching them and the poor skirmishers who happened to be behind them, my remaining skirmishers manage to kill the elephant. Phillipes' army centre collapses, and he elects to consider defeat........his army breaks and the remains of his men withdrawing to fight another day. 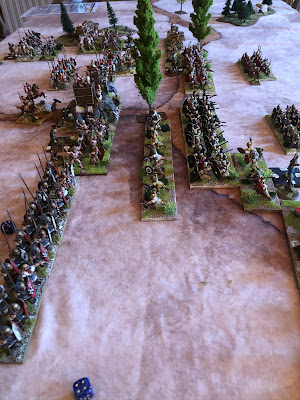 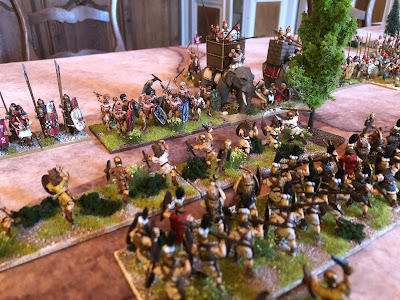 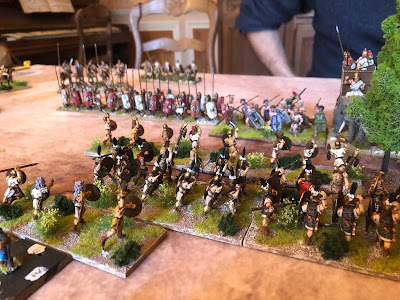 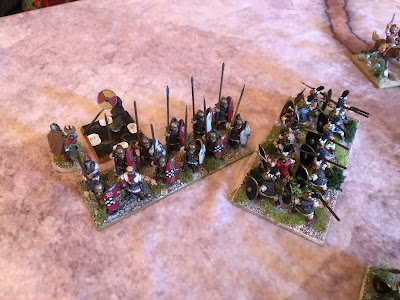 The lonely pike unit on his right 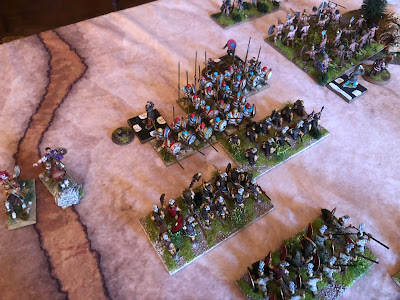 Just before the destruction of the left flank

Good points were taken away, if used effectively light cavalry can be good "taxi de la mort" javelin armed, always get stuck in with elephants, otherwise skirmish armed javelins will whittle them down at point blank range. Skirmishers shoot 360, can move diagonally without penalties so can engage targets from the side at point blank. Large units of Celts are tough, but can be whittled down with light infantry or cavalry. Stay outside zone of control for point blank firing on other shooters, unless they are disordered. Republicans can be tough, if they roll well for the manipulation formation can be devastating.