Completed more light cavalry for my Kingdom of Domnonée army which spans from the 4th to the 11th century. These are great sculpts from Footsore miniatures. I am very happy with the light plaid pattern on two of the figures, not convinced with my red though.

The Bretons have a recorded history of light cavalry since the eastern invasion of Francia of the Goths/Alani in the early 5th century. The Romans settled the Alani and Goths along the border with the Armoricans, the Notitia Dignitatum places them in Orleans, Poiters, Rennes, Alençon, Mayenne, Le Mans and Chartres. These areas became predominant Frank horse breeding areas in the 10th century and remained so up until the 19th century, 6 of the 8 French military light and heavy horse breeds come from the area).
John Wallace-Hadrill in his book Long Haired Kings, links the strength of the Breton feigned flight back to the Alani tactic in the 5th century, and the the overall use of heavy cavalry by the nobles. In several battles with the Franks, Vikings and Normans they used this tactic very successfully. By the 8th century the Breton border had moved to the west from the modern Mayenne river to the Vilane river, then back and forth for the next two centuries. Under Pepin the short, the Anjou-Maine Franks gained the territory, capturing the remaining Breton horse breeding areas almost entirely.  By the 11th century the Anjou-Maine cavalry were also using the tactic of feigned flight, most famously allied with William the Conqueror along with the Bretons knights using feigned flight tactic at the battle of Hastings to break the Saxon sheildwall. 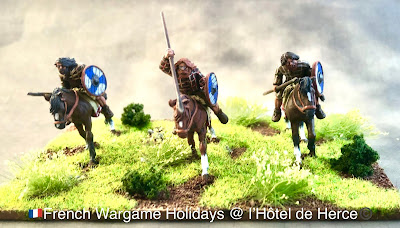 Another unit completed of Gripping beast plastics with a few head swaps of Victrix Celts, a few plastic javelin s and a few metal shields in the mix. Transfers are LMBS and hand painted shields.
This unit could easily serve as any dark age unit, Anjou-Maine infantry, Bretons, or even Goths.

A hive of activity on the desk this weekend as my mojo returns for painting, another Breton unit but for my Kingdom of Domnonée army from the 4th to the 11th century. All metal from Footsore miniatures, with various shield makes, LBMS transfers and metal spears I made myself. Really easy to paint these and happy with the result. This base with it flag will designate an attached command on a stand for Impetus, although I prefer seperate commanders normally as I tend to get them mostly killed when attached! 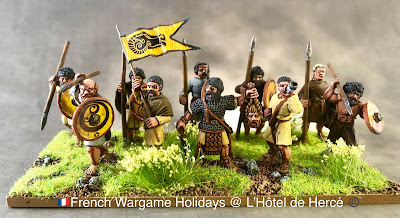 Completed two units of archers, one for late Roman -Alan  archers and a generic Archer dark age base.
Figures are Footsore miniatures. They will fit into any of my late Roman and dark age armies nicely. 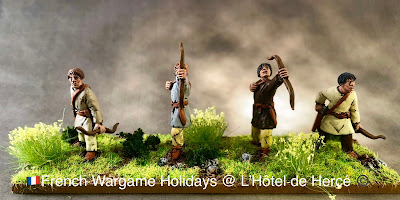 More naked Victrix Tribesmen off the painting desk this weekend, another Aulerci Diablintes heavy foot unit ready to fight off the roman invader!

I managed to assemble the whole remaining 180 Victrix miniatures over the last three weeks, predominantly undercoated they are now awaiting paint over the remainder of Autumn and winter?
I am not looking forward to painting the clothed figures in plaid, but have settled on some contrast patterns, that I have made recipes for over the last three days. I have also mass based the shields and started cuting out the LBM transfers. 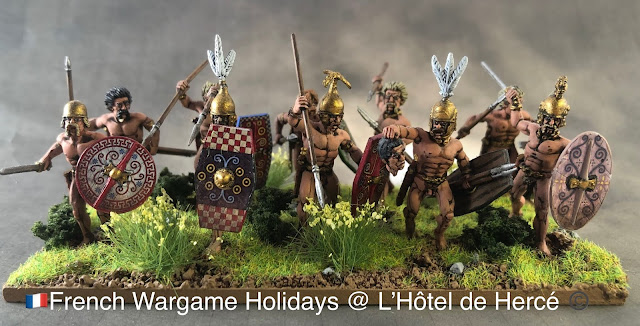 This Footsore command miniature has been sitting around for some time awaiting completion as I wanted a hunting or war dog on the base, after a desk clean up today in preparation for clearing for the Autumn painting projects,  I headed up to the third floor and seeked out my 28mm spares box and found a suitable Warlord Miniatures war dog.  I then finished the dog off and added it to the completed the command base.

This commander will lead my Alan warband. The Alan's were based in Aurelianum (modern Orleans) capital from 406ad and controlled lands along the Loire, Sarthe and Mayenne rivers. The Romans and later the Franks used them to put down rebellions in the west including Armorican massif (Brittany) and famously defended their capital Aurelianum against Atilla the Hun. Later at the battle of Challons in 451 the Alan and Goth cavalry break the Hunnic centre. 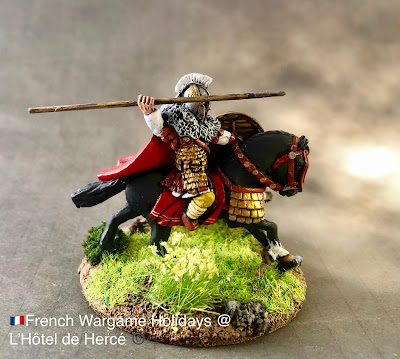 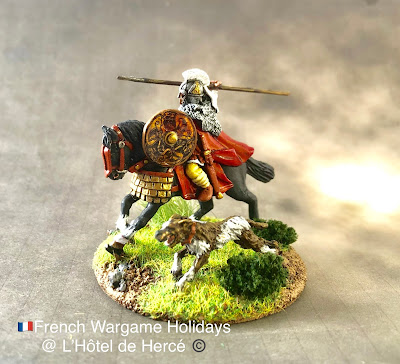 Finally back into a rhythm of painting after assembling 200 odd perry miniatures 100YW miniatures, it truely has been a slog. I also completed a number of Celts also, and finally had an opportunity to undercoat them. I also managed to get some time for some painting yesterday and today completing another two units with another three close behind.

The latest off the desk some more Bretons for my Kingdom of Domnonée dark age army 4th to 11th century, although this unit could double as Maine or Anjou also.