In 296 the Sassanid King Narseh invaded Armenia starting a war with the Roman client King Tiridates III, in response Galerius (Diocletian son in Law) invaded Mesopotamia. Three battles were fought subsequently, the first two of which were indecisive. In the third fought at Callinicum, Galerius suffered a complete defeat and was forced to retreat to Antioch. Galerius then made preparations throughout the winter of 297 and invaded Armenia with 25,000 men.


Galerius supported by the Armenians inflicted a crushing defeat on the Sassanids at the Battle of Satala. Narseh’s wives, his sisters and a number of his children were captured along with huge amount of treasure. Eastern Mesopotamia was recovered by the Romans and Tiridates III was reinstated as the monarch of Armenia.

According to this treaty,  Five provinces beyond the Tigris were to be ceded to the Romans. One writer gives these provinces as Intilene, Sophene, Arzanene, Carduene, and Zabdicene; by another as Arzanene, Moxoene, Zabdicene, Rehimene, and Corduene. The semi-independent kingdom of Armenia was to be extended up to the fortress of Zintha, in Media. Persia was expected to relinquish all her rights over Iberia. Formal dealings between Persia and Rome would henceforth be conducted at Nisibis. 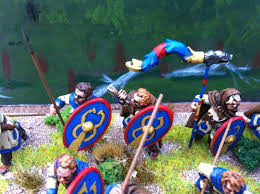 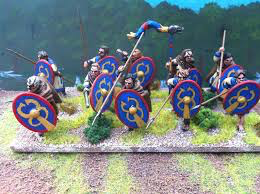 The unarmoured unit is all Musketeer miniatures with hand painted shields, from the description in the Notitia Dignitatum.
cheers
Matt
Posted by Bluewillow at 5/27/2014 01:10:00 PM 2 comments: