The table has had its first outing, although all of the tiles require more work. Hedges, trees, airbrushing the fields, some pigments, the roadside weeds, crop fields, water puddles and ponds and road connections to be completed  on the whole twelve boards. So a lot to do

Visitors  Cookie and Mick from Perth Western Australia stayed with us at L'Hotel de Hercé, on their way to visit the grand white Chateaus of the lower Loire with their wives. They also booked in a rapid fire game with me, giving me the chance to bless the table for its first outing.

We played a scenario I wrote for the 9th parachute regt defending against the german counterattack by the 857th Grenadier  Regiment at Bréville 8th June 1944. The British Commandos were on the left on hold/support orders, the 9th Parachute regiment held the high ground south of Bréville to the woods south of Chateau Sainte Come on hold/defend orders.

Cookie who played as the Germans elected to slowly advance using the two battalions of  infantry to capture the village and advance on the left with a single Stug and on the right with a single Stug in support, the allies used off table fire support from HMS Arethusa 6 inch guns, frustratingly the radio failed to contact the ship for the first two turns, and only really came into effect later in the game.
The Germans advanced unmolested into the village, gaining good firing positions, the 81mm mortars pinned the advancing paras, giving the german infantry time to capture the buildings on the edge of the village. Para rifle and MG Fire managed to cut down a few, but not enough, the Germans managed to place two MGs in the buildings who created great gaps in the advancing paras, bogging the attack down, again the support fire failed to arrive to pin the Germans. On the left flank the german mortar fire and support from the Stug, the HE fire managed to cause casualties amoung the supporting commandos, who although dug in, lost a number of men, and a bad morale roll saw them retreat behind the ridge line, and not offering any fire support nor partaking in the remainder of the battle.
Finally the support fire arrived from HMS Arethusa, pounding the chateau to dust with all four rounds hitting, breaking the two german infantry companies within. In the same turn a para of the second battalion hidden on the edge of the woods managed to get a heroic roll and advanced from cover  and fire his piat destroying the supporting Stug. Things were looking up for the Paras on the right flank. In the middle though the pinned paras suffered under the german machine guns and rifle fire, breaking two companies, leaving the third to assault the church. In the next turn the remaining British para managed to reach and enter  the church, but then suffered from HE fire from the remaining Stug and accurate rifle fire, the para support company also suffered from the 81mm mortar, bringing the battalion test, which it promptly failed, the HQ coy, and support coy both leaving the table, giving the Germans a complete victory to the Germans and in command of the village.


An enjoyable but tight game, the poor morale and radio rolls really changed the tide in favour of the Germans, plus the accurate german mortar, HE and MG fire. Cookie was thrilled as it was his birthday also! 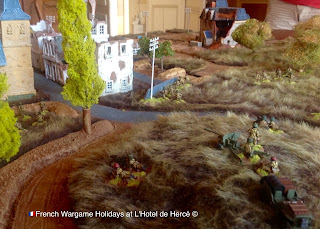 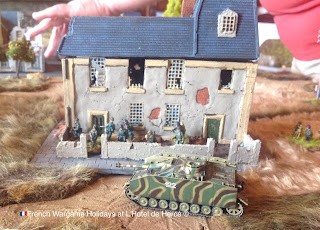 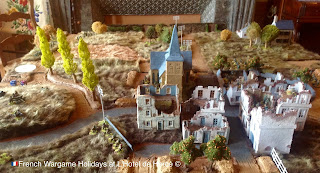 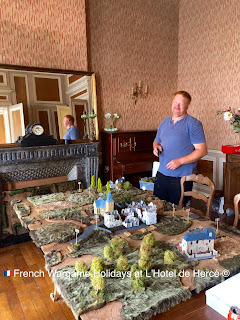